Yesterday, when i went to sleep, this question popped in my mind – why did so many sports originate from Britain?. This morning, as i was waking up, i decided to do a little investigation to get to bottom of this. My logic suggested that it must be due to their colonial expansion. They were present in pretty much all continents all over the world, so their culture and sports spread widely. The other option is, that due to their expansion, they were exposed to a lot of cultures and therefore were able to adapt some of the sports from those people. There is evidence that a team sport, very similar to what soccer is today, has been around in China since ancient times. So British might not be as original sport-inventors as we might think. On the other hand, a game similar to soccer has been played all around the world, and it is not unlikely that British just made it into a decent game with rules and structure.

On the other hand, golf, which is my favorite sport ever, has not originated from England, but from Scotland. But again, despite the fact that Scotts were first to play golf on amateur level, it was British who made it into real sport – made specific rules. And first country where golf had gained mainstream acclaim was in fact Britain. And it’s quite certain that it was because of British influence that Golf landed in USA and Canada. After that, golf has gone on to become popular in many Asian countries as well, namely Korea and Japan. That led to golf manufacturing becoming major industry in both these countries. Japanese, in fact, make one of the best irons for beginners right now. For more information about that, read this guide. make There is also a version that golf was developed in Netherlands, but i doubt that highly, because there is very little evidence for it. 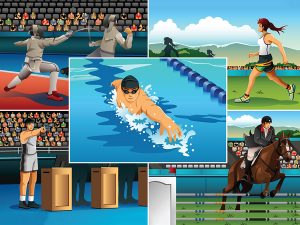 I unfortunately don’t have a lot of information on origins of tennis, but it is known that it has originated from northern france, and it was played with bare hands at first. Few centuries later, rackets were used and that’s when we encounter the word “tennis” for the first time in history books.

One interesting opinion that i’ve read ties British innovation to their abundance of time. As you may know, British empire was the one who led Industrial revolution, so people started to have more free time which they needed to kill. And it’s not like they had video games at the time, so they turned to same old sports that they used to play, but now they categorized and clarified it. And that’s how most of modern sports were born. I must say that it’s pretty satisfying explanation for me.